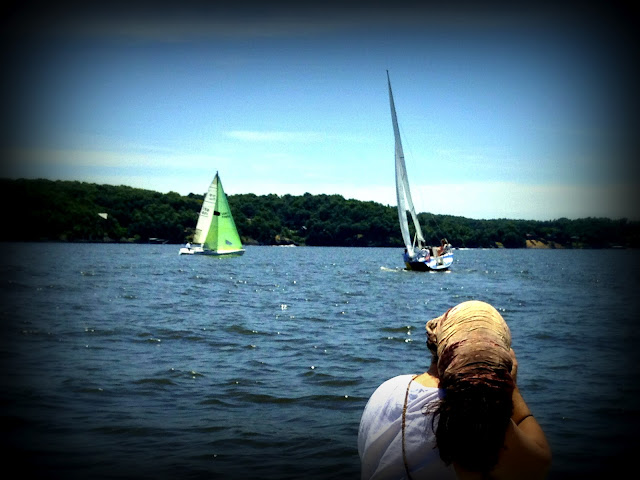 re·gat·ta (r-gät, -gt) n. A boat race or a series of boat races. [Italian dialectal, a contention, regatta, from regattare, to contend, perhaps from recatare, to sell again, compete, from Vulgar Latin *recaptre, to contend : Latin re-, re- + Latin captre, to seek to catch, frequentative of capere, to seize; see catch.]

I am now a three year veteran of this wonderful thing called a regatta ... but NOT as a sailor!  I am the one capturing the images.  I loved this definition and word origin.  Capture.

These beautiful crafts capture one another.
The Center (a non-profit behind this particular regatta) captures support.
I capture pictures.
The lake captures me.

I love how everything smells like the lake when I get home.  I don't want to wash anything!  The nostalgic side is so strong.  It brings me back to the land of 10,000 lakes and growing up in Minnesota.

While I am too tired to be eloquent, I did want to make sure I shared at least one adventure of my own.  This is one of the highlights of my year!  Even Miss M looks forward to it and now has two years under her belt as my sidekick.  Thanks to one of our boatmates who was playing sneaky paparazzi (and of course she would, she "IS" the media!), I actually have a photo to share!  (Yes, that is me as the scarf-wrapped, photo-snapping masthead.)
at June 02, 2012