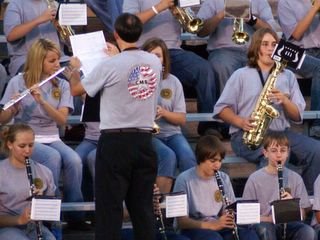 Monday night, he was on the field with the team. Last night he was in the stands with the band. The boy is making the rounds! We've already heard from one classmate about how he is such an amazing player and she aspires to play like him (yes ... SHE ... we have been teasing him about that). But back to the game. The band really did a good job. They played a handful of songs ... some over and over and over ... but well done! The Tigers won AGAIN, by the way!