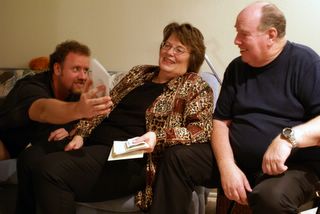 We had a birthday get together for B (today) and K (Monday) ... I shared my favorite game, which has no name. It's basically a set of stories written line by line on notebook paper and passed around the circle, each person only seeing what the one in front of them wrote. Thanks to the creativity of my extended family, we had a pile of humdingers! For the entertainment of all, I'm posting one of the favorites in honor of the eldest Birthday "Boy" of the night!

It was B----'s 65th birthday and
the next thing we knew
an old man pulled a giant frog from his
underwear, but then later put it back because
the smell had started to overtake me. It smelled like
mustard on the sidewalk in the summer!
It had an awful stench.
I took a handful and it tasted just as terrible as it smelled.
It must have been Byrne's cooking!
Everyone was hospitalized with multiple
stab wounds to the upper torso and lacerations of the
wrist. Maybe if you weren't Emo you wouldn't
spit in the air, spin around, crack your neck and
sing Hallelujah! God really is real, you know.
Sometimes I am in awe of the things that He does ...
the midnight massages, the long road trips,
and the good night kisses
got stuck smack on his lips before
they went straight to his hips as
if he were skinny. But we all knew that
he was hiding macaroni and cheese in his pockets.
But it was nothing compared to the fish in his
underpants. He was so embarrassed
because they had holes front and back
with sweet and sour chicken oozing out all over.