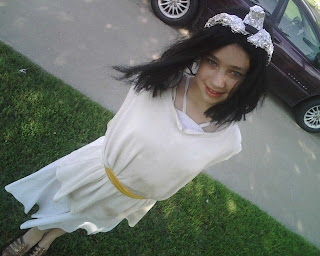 "Clee-oh-paa-trah! Clee-oh-paa-trah!" The chant made me smile as I stepped outside this morning. The bus was about to leave Cleopatra behind! My little actress had forgotten her speech she had been practicing in bed and raced back to the house to get it. Her sandals were flying as the jumble of miscellaneous costume pieces and tin foil threatened to unleash themselves.

Today was the "Penny Arcade" for second graders where third graders dress up as historical characters and give a little speech about their lives every time a penny is put in their cups. Cleopatra brought in 32 cents!
Sent via BlackBerry by AT&T