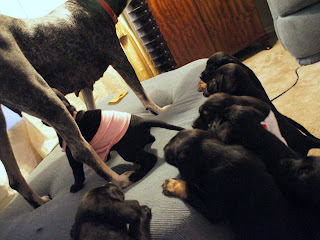 Some of the most hilarious moments have come watching Daisy and the pups when they're nursing. If one happens to get it's mouth on the goodness, they all come running. Even now, when they are pretty much weaned, they still flock when they hear the sound.

I wish I had a video camera handy to share one moment in particular. After their nap, the pups found mama Daisy while she was resting. They latched on and she got up to leave. All but two dropped off and Daisy walked off. Usually that was enough, but the pups are getting bigger. Their feet can touch the ground ... and this time the tenacious two ran along side sucking with all their might while they still had the chance.