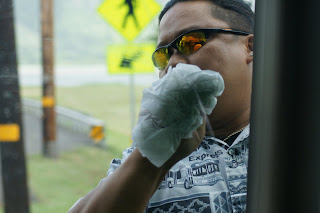 I took a bus tour around the island of O'ahu today ... not some fancy-smanchy one, mind you, but a public transit see-everything-under-the-sun reality kind of tour. About 3/4 of the tour was THOROUGHLY enjoyable. In fact, the first part was actually EXCITING!

But the excitement came from the people I met over and above the amazing backdrop that whisked by the windows. I'll go into it a little more later, but I met a couple of women in particular who inspired me - both photographers - who were doing photography before I was born.

I scooted up by the driver once my conversations were over and asked if he minded if I took photos through the windows ... and as long as I didn't cross the yellow line, I had a green light. GO! And I did. At one stop, he hopped out and cleaned a window. I'd like to think he did it for me. :-)

The highlights are below ... some from bus stops and some from the windows. And even though they aren't the best photos in the world, I left them as they were because I like remembering that I was all jostled and contorted on the bus trying to capture moments as they flew by.