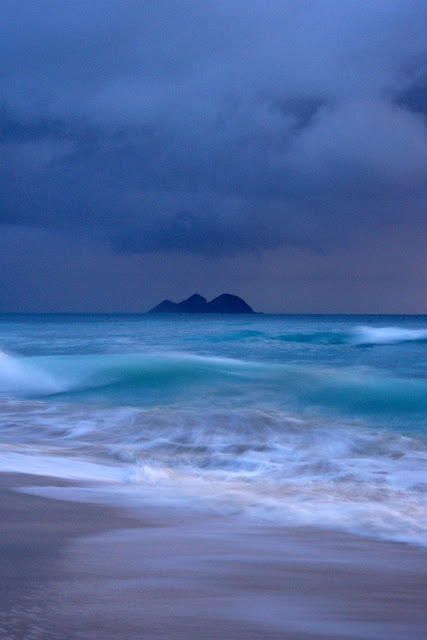 Now that the big conference is over, the hotel is history and the big city lights seem a million miles away (though, they're probably only like 10). I will take this morning view over the impressive skyscrapers any day! Yes, this was my morning. I was up before sunrise. Me (the night owl) was clothed, camera'd, and on the beach BEFORE sunrise! Then again, how hard is that when you're in Hawaii and only have to walk off of the porch to see something like this?

I know. I am so very spoiled. And this was only the beginning! Experience #2 was snorkeling. It took me a while to not hyperventilate or panic ... and it was so completely worth it! All those tropical fish I have only seen in giant tanks became my friends (along with a - be still my beating heart - sea turtle). WOW just doesn't say WOW enough. The slow-motion, dream-like underworld was absolutely amazing. I think I swam for 3 hours!

Sadly, I have no underwater camera gear, but I may not have ever left if I was shooting pictures! So while the rain pours, I am replaying those special moments ... especially the sea turtle greeting. I would have been a little squeamish about touching any of them in a setting more natural to humans, but the mesmerising effect of those reefs is amazing. I could have touched them all (but you're not supposed to), and if one had touched me, I wouldn't have flinched. Instead, I would have fallen in love!

And one more no-photo moment is still vivid ... the moonrise last night. It was stunning (I didn't know there was such a thing) and I would have taken photos except that I was bobbing in the sea happily riding the waves watching the mountain mist and ocean curls.

At the moment, I am sitting under an awning watching a sudden rain. WOW! It isn't windy but somehow it is REALLY wet everywhere!